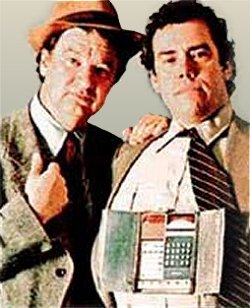 1976 was a very good year: the Bicentennial was in full swing, comic books were only twenty cents, and ABC decided that it was good idea to air a TV show about a grizzled NYC detective who was shackled with a bungling robot partner. And that show was called "Holmes and Yo-Yo."

The premise was thus: Detective Alexander Holmes (Richard Schull) is a veteran cop whose partners always seem to get killed (just like Dirty Harry). Somehow a scientist becomes involved and comes up with a logical solution: construct an industructable robot (John Schuck, the one in the picture with the fancy circuitry on his chest) and pair it with Holmes.

The robot was named Gregory Yoyonovich (because he was made from Polish parts?) and his robotic nature was kept a secret from everyone but Holmes and few higher ups. He was nicknamed Yo-Yo, because cops are funny that way. The meager laughs came from the fact that the robot malfunctioned constantly; being struck by a bullet causes him to break out dancing, magnets fly at and stick to him, he picks up radio signals from Sweden, and when his circuits blow he repeats "Bunco Squad, Bunco Squad, Bunco Squad" over and over.

Yo-yo was not without his crime-fighting virtues, however. He had the power to eat anything, a built-in trash compactor that could absorb the shock of a bomb, a photographic memory, an independent power source and could also print out color proofs, long before Kinkos managed that feat.

"Holmes and Yo-Yo" lasted only 3 months. This is because A.) it sucked and B.) it aired opposite "The Jeffersons", which was a huge hit at the time. Apparently a mere robot was no match for Norman Lear.

ABC tried to dip their toes into the robot cop waters again later in the same year, this time with "Futurecop", a drama that paired beat cops John Amos and Ernest Borganine up with a robot partner. The producers were promptly sued by noted science fiction writer Harlan Ellison, who contended that the "Futurecop" screenplay was stolen from one of his short stories/teleplays. Ellison subsequently prevailed in court.

Do not tread on Harlan Ellison. Not only is he a great writer (a longtime favorite here at Blogfoot) and an outspoken advocate of creators rights, but he sues people constanly for swiping his ideas, and wins. He sued James Cameron over "The Terminator", contending that it mirrored his short story "Soldier", and won. He sued ABC over "Battlestar Galactica", contending that it was the same idea he presented to networks as a potential series in the mid-70's called "The Starlost", and won. 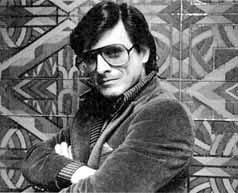 Which is a perfect segueway to mention that Mrs. Blogfoot and I just met Mr. Ellison (pictured at left as he looked in the late 70's) at a book signing on Easter Sunday here in the Twin Cities. He entertained the crowd for a solid couple of hours with his stories and banter. He then asked me and Mrs. Blogfoot if we had just walked off the set of "Beverly Hills 90210" and that we looked like a couple of greek statues. That's right, readers: Harlan Ellison thought we were hot. Bear in mind that he had just spent 3 days as the guest of honor at a sci-fi convention that was held in town, so he hadn't exactly been exposed to the cream of humanty's genetic crop for the previous 72 hours.

Those inclined to read some good prose should check out Ellison's work if they haven't already. It's forceful, interesting, highly original stuff. Newcomers should start with "The Essential Ellison" , a large compendium of his most popular / lauded short stories and essays. You could also rent the 1975 film version of his classic short story "A Boy and His Dog", about a teenager roaming a post-apocalyptic wasteland with his telepathic pooch. It's a nice low-budget cult film, and the short story from which it is adapted is without a doubt a fantastic piece of literature. Thus concludes todays lesson.
Posted by Blogfoot at Wednesday, April 19, 2006

Sounds like Mr. Ellison should be writing fiction like " a Swinger and his Pony" , a sensitive sprawling epic about an aging hipster writer who flaunts his celebrity and uses it to trap unsuspecting yuppies infatuated with his previous glory. Decorum and good taste dictate I don't discuss what the pony is for here.

So what I've gathered is that you wrote this entire post to brag that some washed up sue-happy scifi writer thought you and your trophy wife were hot.

I was quite clear that his vision was most likely scarred by spending 3 days at a sci-fi amongst the pear-shaped masses.

And I like to think of it as my wife having a trophy husband, thank you very much.

I feel holier for having read your thoughtful sermon. Or do I feel geekier? Yeah I think geekier. I wish I had glasses like that.

Very nice! I found a place where you can
make some nice extra cash secret shopping. Just go to the site below
and put in your zip to see what's available in your area.
I made over $900 last month having fun!
make extra money

Very nice! I found a place where you can
make some nice extra cash secret shopping. Just go to the site below
and put in your zip to see what's available in your area.
I made over $900 last month having fun!
make extra money

You have an outstanding good and well structured site. I enjoyed browsing through it » »